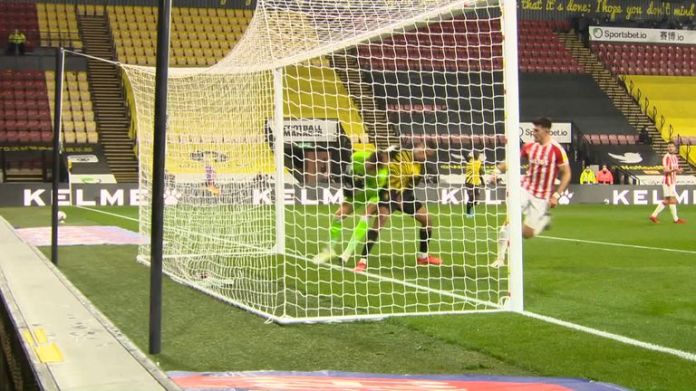 Cleverley’s rising drive from just inside the box was high quality and goalkeeper Angus Gunn did well to tip it onto the underside of the crossbar.Gunn recovered to grab the loose ball and was barged on the line by Pedro, with referee Andy Davies then indicating he had received a signal to say the ball had crossed the line. 0:38 He awarded the goal, to Stoke’s fury, and tempers flared on the touchline as fourth official James Linington was consulted.Had the ball crossed the line from Cleverley’s shot? TV replays were inconclusive. Had Gunn taken it over himself? If so, had Pedro’s challenge been legal?There were more questions than answers but the goal stood.Stoke were unsettled and Gunn immediately had to stop Sarr firing Watford ahead, although the Senegal striker’s dithering helped the on-loan Southampton man get into position to block.Sarr began the second half intent on making amends but a one-two in the Stoke box with Cleverley saw Gunn slide out to grab before Fletcher headed a good chance wide at the other end.Stoke appeals for handball in the box by Kiko Femenia were ignored by referee Davies, who booked Watford’s Nathaniel Chalobah for an earlier foul.Gunn then brought down Sarr from Danny Batth’s poor back-pass and Pedro made no mistake from the spot before being instantly replaced by Andre Gray, who headed narrowly wide in the 72nd minute.Stoke felt justice was partially served when Powell lashed in an 81st-minute equaliser with a low drive beyond Ben Foster’s reach from just inside the box.But Sarr struck three minutes into added time after Ken Sema had wriggled free on the left and laid the ball back.What the managers said…Watford’s Vladimir Ivic: “The first moment I couldn’t see exactly what happened but at half-time I heard that maybe we were lucky with the decision. But we cannot speak just about this goal. If we speak generally about the game we didn’t start well. We started to play after the goal of our opponent and this is something we need to fix.“After that we were the dominant team and I believe we have made progress if you speak about possession, attacking moments and crossing. We can do better and our target will be to do that. We need to be focused from the first second to the last of every game.”Stoke’s Michael O’Neill: “We didn’t feel it was a goal, simple. I’ve seen the replays and it’s clear the initial shot did not cross the line. The technology was triggered by the Watford player’s contact with Angus that puts the ball over the line. So we feel aggrieved by the goal. We felt the referee missed a handball in the build-up to the third goal aswell.“The officials have to look at the events as well as the technology. On this occasion the technology didn’t help them in any way – when you see the events it was a very harsh decision against us. We felt there was a foul on Angus after he gathers the ball so if the technology is triggered post the goal obviously you would expect that is not a goal.“We are disappointed with the decision but it is not going to change now and we will just have to move on from it.” A controversial equaliser shrouded in mystery helped Watford beat Stoke 3-2 at Vicarage Road, where Ismaila Sarr scored the winner in stoppage time.Joao Pedro was also on target from the penalty spot and although Stoke’s Nick Powell made it 2-2 in the 81st minute, Sarr had the last word to lift the Hornets into the play-off positions.- Advertisement – 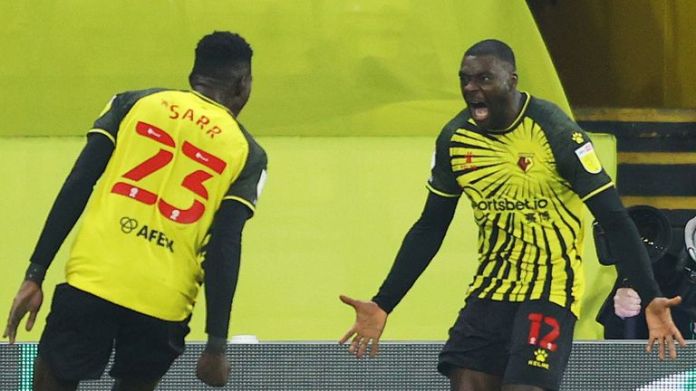 Image:Ismaila Sarr (L) scored a stoppage-time winner for Watford Stoke will take some convincing, however, that the goal which cancelled out Steven Fletcher’s second-minute opener midway through the first half – credited to Tom Cleverley – was not a major miscarriage of justice.It took the Potters all of 90 seconds to take the lead from a cleverly-worked short corner routine that ended with Powell setting up Fletcher from close range. The game’s controversial moment arrived in the 28th minute in the shape of Watford’s puzzling equaliser.- Advertisement – – Advertisement – Watford scored a contentious equaliser against Stoke when Tom Cleverley’s shot was saved by Angus Gunn but the ‘keeper was then bundled over the line by Joao Pedro – Advertisement –